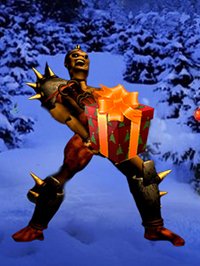 Twas the week before Christmas, when all the through the realm... Not a game was building, the server was down.The passwords where typed by each player with care, In the hopes that the game lobby soon would be there.The players where nestled with mouses in hand, while visions of carnage danced through their heads.

Max in his breaches, and Blue in his cap, Had just emailed Dranden for a five cycle nap. When out from the net there arose such a clatter, blue sprang from his chair to see what was the matter. Away from the keyboard blue flew like a flash, Tore open his CPU... His Nic card had crashed! The light on his desk, touch lamp with globe, Gave the luster of mid-day to the hardware below, When, what did blues wondering eyes notice here, It was not his Nic card, but the worst of his fears.

With nimble fingers, so lively and quick, he would email the admins, that would do the trick. More rapid than eagles his text had came, And when he was finished he spoke out their names. "Now Dranden! now, Max! Webdev and Gackmasta! On, Wyrmmlore! on, Lord foul!, the imp! and Gnasher! To the heart of the game! No reason to stall! Evernight is not working! Not working at all!"

With the speed of an amber let out of its cage, he sent off the emails, every last page. So up through the internet his messages they flew, with pleas of hurry and some thank yous.

And then, in a buzzing, blue heard in the room... the chimes of IM's coming so soon. As he drew in his hand, and reached for his mouse, an invite to view webcam, came to his house. He moved the curser and clicked on the screen, and to his surprise it was the Evernight team.

With a bundle of notes they all had amassed, Max put blue to work and did it real fast. A wink of his eye and a twist of his head, Soon gave me hope I had nothing to dread, He spoke not a word, but went straight to work, and fixed all the files, then turned with a jerk, And laying his finger aside his nose and giving a nod, the database rose.

He sprang to login, his team gave a whistle, and away they all flew from the web conference like the down of a thistle.


But as Blue reached for the power button, he thought he heard something, a little bit subtle, and before the window popped out of sight, he heard.


"Happy Christmas to all, and to all a good-night."