The Battle of Thrin 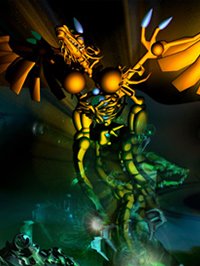 How a player witnessed history

War had come to the doorstep of Thrin. Birthplace of the last hope, and champion of the gods. It was she who unleashed the destructive force of the forms, and it was she who decided that their power was hers alone to defeat.

Gathering the last remaining troops loyal to her, she gambled everything on one final battle. Fortifying Thrin with the ancient and powerful mechanisms of the Golden Age, she called for her allies. Without the aid of the black between, K'ar Tuf had to rely on her own power to gather the last remaining loyal forms. The beings of Chron who forever campaign for good, and the return of better times answered the call without hesitation. The creatures of Zan who campaign for life and the return of order, answered as well. Amber Dragons flew high above the fortress as Colossas stood patiently before it.

Then out of the darkness came an unexpected ally. The Incineraks who burn all in their path. K'ar Tuf was not sure at first, but she accepted in the end.

As they closed the gates behind the last of the new ally, the horns and drums of war sounded. The battle began in the sky. The clash of amber and black gave the sky new life. Green fog danced on the air as bright orange flames flashed throughout.

The mighty Colossa found their foes next. For every Colossa, there rolled forth three Iron Hulks from darkness. A clash of stone and metal took place that day unlike any other.

The forest before Thrin began to move. The mighty Glow poured out forth from within like a flood. But K'ar Tuf was prepared. The fort they defended was unlike any other upon the face of Evernight at the time. It granted her men the strength of the legendary Blood Glow. The gates soon burst open, and the sound of swords clashing began ringing through the air.

K'ar Tuf stood atop the fortress watching and waiting. It wasn't long before she found what she was looking for. The evil and sneaky woodens moved into the fort making their presence known.

K'ar Tuf then enacted her surprise attack. She let loose a battle cry and the Magma Demons came out of hiding themselves. The lessers defending their fort then found that they had transformed into Moon Glow.

The time had come for K'ar Tuf to enter the fray against her oldest enemy. The enemy that shouldn't exist. Bork!

K'ar Tuf lept from the top of the fort as she drew her sword, forged in the fires of an ancient mountain now forgotten. She landed on the first Wooden to penetrate the fort. Weaving in and out of the twisted branches, she found it's heart. Immediately she pierced the bark that protected the evil form's driving force with her sword. As the Wooden collapsed to the ground with a thud, she lept from the dying form and landed in the vile branches of her next victim.

K'ar Tuf was a mighty warrioress this day. They say that her rage and swordsmanship surpassed all. It was her personal battle. She slayed several Woodens, and would've went on to slay even more...if only it hadn't been for the treachery of the Incinerak.

Black Dragons fell from the sky, Iron Hulks shattered to pieces, and Woodens turned into countless splinters. K'ar Tuf was on the verge of victory.

The first sign came when the Moon Glow of K'ar Tuf lost power and reverted back to Blood Glow, and their enemy became their equals.

The second was the giant mechanism that fell from the sky. A flash of light blinded everyone momentarily and in the next instant, the fort was in ruins. K'ar Tuf's men found that they had lost even more power.

The final sign was the turning of the Magma Demons. All around her, K'ar Tuf saw the death of her forces, and the end of her final stand. Bloody and beaten Amber Dragons plummeted to earth. Mighty Colossas shattered into pebbles. The race of Glows that walked Evernight without the power of the black betweens became extinct.

Distracted by the failing of her forces, K'ar Tuf found her self surrounded by Woodens. She fought valiantly as they trapped her in their darkness. Clambering through the mass of Woodens appeared a figure K'ar Tuf knew very well. Bork had returned. Her light dissappeared from the world as the battle came to a close.

This day went down in history. This was the point where the war of the forms consumed all. Even the great K'ar Tuf fell to them. Let this story serve as a warning to all who would dare control the forms, and a reminder to all...that Bork still roams Evernight in secret, waiting for his moment to strike.